Read This Before Your Next Band Photo Shoot 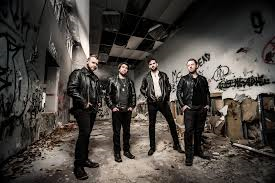 You want to take great band photos, don’t you? Not just ones where everyone’s in focus and the bassist remembered to wipe the stalactite of spit from his upper lip?

Yeah, of course you do. We all do — especially when the difference between your music getting ignored and getting big exposure in the press often comes down to one thing: having great band photos.

But in order to get that great shot you’re going to need the right clothes, the right setting, the right lighting, the right expression at the right moment, and the right photographer to catch it all in one instant. For many of us, that’s already a tall order. Now consider this: a single band photo is not enough.

Well, both you and “the media” are going to use your band photos in multiple ways. Editors and bloggers want options. The easier you make things for them, the better your chances of getting press coverage in the form of album reviews, concert previews, band interviews, and more.

Unless your photographer can capture one image that fulfills all the requirements listed below, you should aim for taking a handful of good photos.

Here’s what you should discuss with your photographer long before the photo shoot:

1. Landscape vs. Portrait orientation
Depending on how their article is laid out on the page or screen, a music editor might want to use a wide shot, or they may prefer a taller, skinnier image. Make sure you’ve got at least one of each in your online press kit so the publication covering your music will have access to the images they need.

2. Cropping
Again, depending on their formatting needs, an editor may want to crop one of your photos. Make sure you have at least one image where portions of the picture can be sacrificed without killing the overall composition.

3. Close-ups of each member
There are a few reasons you’ll want to get good close-up shots of each member of the band: a profile piece that covers each person individually; an ABOUT page on your website that has separate member bios; etc. You COULD get these individual shots by cropping each person from a band photo, by why not make it easier on everyone and take the portraits during the photo shoot?

4. Thumbnails
On the web, everything is SHRINKING (except for that bolded word)! And now, when most people are accessing the Internet via smartphone, pictures are getting even smaller. So be prepared. Make sure your band photos either look great as thumbnails or snap a few new shots that WILL.

5. Web banners or other advertisements
If you use an image of your band in a banner advertisement, you’re going to need a lot of space for the actual copy (text) of the ad that overlays the image. That means, most likely, that the band members are off to one side and the writing is on the other side. If one of your standard press photos can’t be cropped to suit this purpose you’ll want to take some shots with this goal specifically in mind.

6. A website background
If you have a website design or template that uses a large background image, it can be really cool to use a picture that was taken during the same photo shoot as the band photos you’re sending to the media. But again, you’ll want to make sure you leave some space for your web content, widgets, etc. Otherwise your music player might be sitting right on top of the lead singer’s face.

7. Header images for social media profiles
Think of the space at the top of your band’s Facebook page. It’s kinda like a landscape-oriented photo, but stretched. It’s usually difficult to crop or resize existing band photos into those dimensions, so it’s a good idea to plan accordingly before your next photo shoot.

9. Black & White
Here’s another one that is important when you think about getting press coverage. Print media, for obvious cost reasons, often favors B&W photos. If you’ve got a stunning color photo that works well on the web or in a glossy magazine — but loses its power when it goes to gray — well, use that one for the web and glossy magazines! Then make sure you’ve got some shots that are equally captivating without color.

10. Clean, clutter-free images
Sometimes it can be charming to have a busy photograph. A messy studio, a crowded stage, etc. But if one of those kinds of shots is your go-to press photo, make sure to give the media some clutter-free options too. They’re easier to lay text over and they’re easier for the viewer to make sense of when shown in B&W.

Again, discuss these considerations with your photographer long before the photo shoot; make sure she knows the goal is to get a great picture for each of the uses mentioned above. Once you’ve got good band photos, you’ll also have a huge advantage over other acts in this competitive music biz game called “getting press.”