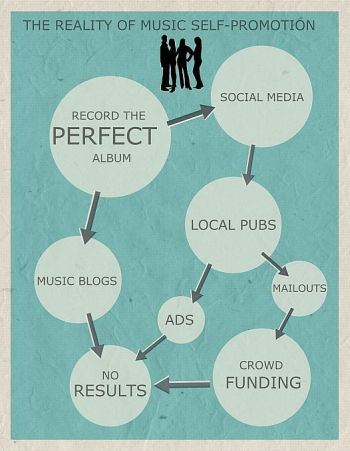 Self-promotion in the music industry is a topic that has been explored extensively over the past 20 years. Some of the basic ground rules are the same that apply to any business or freelancer. Most people in the industry, however, bands included, don’t know a whole lot about it. Many prefer to hover around the topic of social media because it’s all they know. After all, once you call yourself a “social media coach”, there’s really not much room for expansion besides posting an analysis of every new Twitter or Facebook development/etc.  Artists flock to new music technologies, discovery platforms, unsigned networks, indie authorities, and crowd funding platforms looking for the answer, and yet, the message generally being sent to the artists tends to do them a disservice. Promises, promises. Even the term “submit your music” can be very misleading. Submit it where? Well…the junk folder, to be blunt.

Just as people starting businesses often under-estimate the amount of work necessary, so do unsigned musicians and bands. A quick disclaimer: it IS possible to be very successful as a musician in 2013. You can do it. It’s helpful, though, to do away with some of the lies that we typically accept from today’s music authorities, and I’ll go over some of those here. The intention isn’t to be overly blunt. Just to tell the truth. Below are some reasons why your music self-promotion may not be working.

It’s wonderful that there are so many services for artists to use to send their music to either industry professionals, festivals, blogs, magazines, and radio promoters such as Sonicbids and Music XRay. Mixed feelings abound about these sites, but to call them positive or negative would be a snap judgement. Does it suck that it costs $40 to simply apply for X music festival given that this is a digital submission we’re talking about, and chances are your music will not receive a fair listen? It sure does. Would it possibly be a life-changing experience if you were chosen? It certainly would. Musicians today are accustomed to waiting in line for just about everything. After all, it’s busy as hell out there. While it’s necessary to wait in some lines, and good results can come of that, if you merely play by the rules and wait in lines you’ll get stagnancy, and that isn’t a very fun gift to open up for Christmas.

Artists need to think as creatively in their promotions as in their songwriting. Outsource your duties. Get momentum by getting freelancers on your side. Promote outside of the music blog arena. Hire people to promote your music; preferably a lot of them. Get the forums buzzing. Get people requesting your music. Get people writing about your music. Donate to blogs you like. Use Fiverr and similar micro-job sites. Read Tim Ferriss. Read business books. Get out of the “band” mentality. Ignore the music authorities and start infiltrating.

2) You’re only promoting on social media.

Don’t get me wrong. Social media, when used correctly, can have a massive effect on your success. The only problem is, since most industry guru’s and music marketing publications tend to focus on social media exclusively, the current generation of artists are spending all of their time posting, pinning, tweeting, hashtagging, reblogging, liking, sharing, tagging, stumbling, digging, and cultivating the perfect “reddiquette”, but in the end, without the proper balance, the result is something close to a Warcraft or Angry Birds addiction. Time down the memory hole.

It’s easy to forget that not everyone hangs around on these networks, and even if they do, they’re often tuned into only what their personal perceptual filters will allow; not something new. It’s important to keep your communication skills in tip-top shape, to send actual, conversational emails, make phone calls, and speak with promoters in person. The worst faux pas is messaging companies or industry people through networks such as Facebook. These often go unanswered, as these networks are riddled with spam, and real messages get lost in the shuffle. Send a real, personalized email and notice the difference.

Thought it might be a good idea to outsource your music marketing to a robot? Some of the most heavily advertised automated services such as Beatwire and Musicsubmit look very attractive to most artists. They promise to send your music to X number of journalists, radio hosts, and industry professionals, and charge a flat rate for doing so. The rates are often less than what most publicists charge, making it even more enticing. But how are these emails received? For one, most journalists and bloggers receive dozens, if not hundreds, of real emails daily from promoters, labels and artists who either wrote the message personally or at least prepared a proper email and clicked the “send” button. How much respect do you think they have for the “easy way out”, an automated press release, or possibly a Reverbnation profile delivered to their inbox? If your music submissions say anything along the lines of “powered by…”, you can expect little to no results. I’ve been added to lists by companies like these without so much of a “Hello” or “Would you like to be added to our recipient list?” You know what that’s called? Spam.

I can’t tell you how many times I’ve submitted an artist to X Magazine or blog and received enthusiastic response back from their sales department, who conveniently request that I pay an exorbitant rate for an online or print advertisement. When I mention that I’m unable to advertise but would still appreciate editorial consideration, I’m told that the sales and editorial departments are separate. For one, this is the public statement of many publications, but it’s simply not true in many cases. If you don’t buy their advertising, which is often over-priced given that you’re at times the only income stream, your submission goes mysteriously missing. Now, most artists can’t afford to advertise on multiple major magazines, nor is it usually worth it if I’m being honest.

This can be the same with music blogs, and any kind of music service, which makes sense to a particular degree. If you think about it, no one really has all the time in the world to sit around listening to and reviewing albums. There needs to be an exchange, whether it’s properly priced advertising, blog donations, paid reviews, crowd funders or anything else. If a paid review scenario is fair, do it. If it’s outrageous, move on. Remember, you can always find freelance writers who may be interested in writing about your music by advertising on Craigslist.

5) You’re not already on their playlist.

The front door appears to be open, but it’s all for appearances. Many music blogs featured in the coveted directories/aggregators (Hype Machine, Elbo.ws) are closer to personal blogs than anything else. Hundreds of artists submit music to them every day, but chances are they’ll never post a single one. The blog owner simply posts their favorite artists periodically. So why all this misleading the public then? Well, blog traffic is always a good thing for the webmaster, leading to advertising and potentially other partnerships, so cultivating an audience of indie musicians to rack up the hits isn’t a bad thing from their perspective. It ends up being wasted time for the artists, though. Some blogs are good enough to post a simple statement such as “Don’t send me your music. I only post my own findings.”

6) You’re not famous or gossip-worthy.

Which brings me to my next point. Many supposed “indie darling” blogs and publications have, over the past 10 years or so, turned into gossip rags, and you’d be hard-pressed to find any content outside of Lana Del Rae and ASAP Rocky (and not their new albums). Take these off your media list and don’t give them your traffic if they’re of no use to you.

7) You have nothing to barter with.

Put yourself in the blogger/editor/etc’s position upon opening your email. Why should they take an hour of their time to promote you? At the very least, you should have built a large network, and offer cross-promotion for the post. This shows respect on your part. The reason good indie labels, radio promoters and PR companies typically get much better results when promoting artists than the artists themselves get is because of leverage. They’ve built up their networks and regularly cross-promote. They may have arranged other partnerships or deals with the publication as well. You scratch my back. I’ll scratch yours.

If you’re emailing someone for the first time, it’s a lot like making a cold call telemarketing. You can’t expect the results to be overly high. This is another reason why good labels, radio promoters and PR companies get better results. They’ve established those relationships and they’re not saying “hello” for the first time.

There is no one rule. Some bloggers want personal messages while others would blacklist you for attempting chit chat. Some want you to tell them how much you just loved their recent piece on Daft Punk’s new album (the 633rd one you’ve read), while others would see that as a trite move. There’s no way to win here. What I do, myself, is provide absolutely everything the blogger may need in a concise way, so no Googling is required, as well as sending a personal note going over why I connect with the artist being submitted. If you’d like an idea of how to do this, check out my music blog promotion template.

I was horrified when I first learned that many music blogs and publications often receive hundreds, sometimes thousands of submissions a day. Once again, we’re waiting in line in the review queue. You can’t expect time to magically appear for these people. If I were in their position, I’d shut down. I’d take more time offline and leave the disappointed in my wake.

11) You haven’t differentiated yourself.

This is a big one. You’re lost somewhere in the supermarket, and it’s tough for the store manager to find you because you look similar to every other child there. You’re certainly not “the blue child”. If anyone ever told you to “appeal to the industry” or write songs for the radio/etc, it’s time to throw away those silly notions because they’re destroying what your art could be. Often, the reason an artist goes unnoticed isn’t mysterious at all. You may have, in an attempt to be “heard by the masses”, crafted yourself into a generic package. You’re not really yourself. You’re playing to someone…a hypothetical creation. Be yourself, the weirder and more original, the better. If there are two people doing what you do, the odds are already against you. Be the only one.